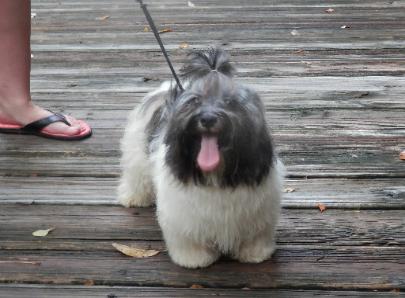 CH Honors on the square of Los Perritos

My son asked me if I had an older dog to be a companion for his elderly mother-in-law living alone in VA.

After thinking about “did I”, I thought of Bamm Bamm.  Such a sweet boy. The only two girls I had were his daughter so I went ahead and neutered Bam and he went to VA where he now sleeps in bed with his devoted new mom.  This left me in a crunch for a new stud dog. I called my friend and mentor Lynn Nieto of Los Perritos in FL. She had a 2 year old champion male with all health testing completed that she would let go.  That is how Mason came to Salemfarm. He is such a good boy. He is kind and gentle even with an obnoxious 7 month old puppy.